Swāt (Pashto, Urdu: سوات‬ pronounced [ˈswaːt̪])[1] is a valley and an administrative district in the Khyber Pakhtunkhwa province of Pakistan. Swat is renowned for its outstanding natural beauty, and was described by Queen Elizabeth II as “the Switzerland of the East” during a visit to the region in the 1960s.[4]

Centred upon the upper portions of the Swat River, Swat was a major centre of early Buddhist thought as part of the Gandhara kingdom, and today is littered with ruins from that era. Swat was home to the last isolated pockets of Gandharan Buddhism, which lasted until the 11th century, well after most of the area had converted to Islam.[5] Until 1969, Swat was part of the Yusafzai State of Swat, a self-governing princely state. The region was seized by the Pakistani Taliban in late 2007,[6] and its tourist industry decimated until Pakistani control over Swat was re-established in mid 2009.[7]

Swat’s capital is Saidu Sharif, though the largest city, and main commercial centre, is the nearby city of Mingora.[8] With a population of 2,309,570 according to the 2017 census, Swat is the third-largest district of Khyber Pakhtunkhwa. The region is inhabited largely by Pashtun people, except in the valley’s uppermost reaches, where the Kohistani people dominate.[5]

Swat’s average elevation is 980 m (3,220 ft),[5] resulting in a considerably cooler and wetter climate compared to most of Pakistan. With lush forests, verdant alpine meadows, and snow-capped mountains, Swat is one of the country’s most popular tourist destinations.[9][10]
Yakh tangai is a tourist point in Swat Valley.
tourism swat valley 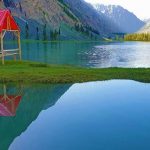 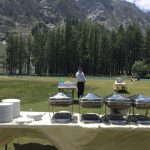