The history of Swat valley goes back to around 2000 years ago. It was known as Udyana and later the name was changed to Suvastu. … In the time period of 19th century, swat valley was under Akhund Sahib who believed in the Muslim law.

Swat valley is one of the major tourist attractions of Pakistan. It is known as the Switzerland of Pakistan, it has one of the oldest civilizations history and one of the beautiful scenery one could ever see.

Location: It lies between 34°-40′ to 35° N latitude and 72′ to 74°-6′ E longitude. It is located between the foothills of Hindukush mountain range. It is the part of the North-West Frontier Province of Pakistan. The location of Swat valley has a major strategic importance as it lies in the region where South Asia, Central Asia and China meet.

Accessibility: Swat valley can reach through Peshawar, Rawalpindi and Islamabad. The total distance from Peshawar is 151 km and from Rawalapindi via Nuwshera- Mardan and Malakand Pass is 270 km. We can easily find regular flights to Saidu Sharif, the capital city of Swat. When travelling on personal vehicles, the Motorway (M-1) can be used to reach Mardan Interchange from Islamabad which takes approximately 1.5 hours (131km). From Mardan, a distance of 112 km can be covered via Takh-e-Bai, Dargai, Malakand Pass, Batkhella, Chakdara to reach Mingora or Saidu Sharif. It takes almost 5 hours to cover the distance of 247 km. The travelling routes are open throughout the year. Nowadays public transport facilities have also improved. Daewoo buses are commonly used for travelling.

Attractions: The major attractions of the Swat valley include its archeology, the lush green sites, the history and their art.
History of Swat Valley
The history of Swat valley goes back to around 2000 years ago. It was known as Udyana and later the name was changed to Suvastu. The valley was a very peaceful area for living until the 11th century. The game of power led to the disruption the valley and it was first conquered by Mahmud of Ghazni. The ritual of acquiring the lands continued and Swat valley was then taken over by the Yusufzais.
In the time period of 19th century, swat valley was under Akhund Sahib who believed in the Muslim law. At this time, the economy of Swat valley flourished due to agriculture and it became one of the significant trading areas for businesses.
The population of Swat valley is around 1,257,602 and they have a number of cultural group living in which the most prominent ones are Pakhtuns, Yusufzais, Kohistanis, Gujars and Awans.
Swat Valley is known as the “mini Switzerland”. Its landscapes are a proof of natural beauty and it was one of the most visited areas and had a major tourism industry. There were events which led to the downfall of the tourism which was one of the major sources of income of the Swats economy. The conflicts between the Taliban and the Pakistani army have effected the valleys attractions. The whole conflict started in 1990s when Sufi Muhammad, a cleric figure tried to impose the sharia law on the people of swat valley. In 2007, his son in law tried to follow his foot step by imposing the religion with strength of arms. The Pakistan army took control of the situation and in 2008 the war of Swat was put to an end. Another factor that also contributed in diminishing the tourism industry include the floods in 2010 in which most of the infrastructure was destroyed including the roads and bridges leading to difficulties in traveling to Swat valley.
tourism swat valley 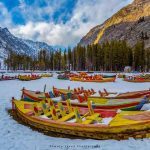 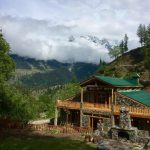